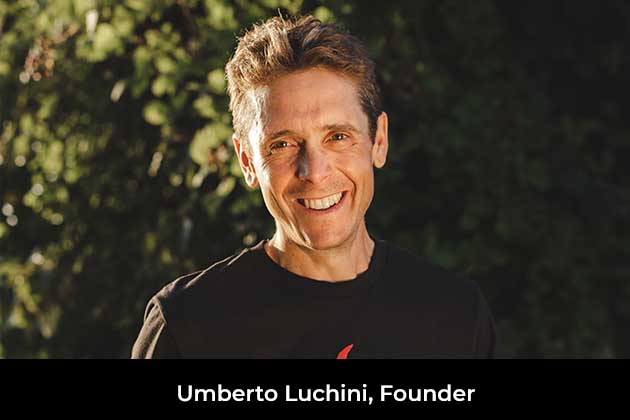 Wolf Spirit Distillery is an independent, premium liquor company committed to  disrupting the marketplace with new and unique spirit brands. “I was born in Italy,  schooled in the UK, started my career in France and then entered Monaco’s spirits industry with Campari,”says Umberto Luchini, Founder of Wolf Spirit Distillery. “In 2003, I was transferred to the US, and by 2007 I became an American citizen. By the time I started my own company, I had worked in marketing for about 25 years. For the first 24 years of my career, I had marketed products produced by others. Then, in the  25th year, I decided to launch my own brand: Wolf Spirit  Distillery.”

While Luchini was still in Campari’s marketing department, he had been tasked to create and launch  a tequila brand for the company and Espolòn Tequila came to be. “I am proud to say it is often called ‘the Tito’s of Tequila’ for its rapid growth, and this success  gave me the itch to create my own brands,” explains Luchini. He tried to do this within Campari, presenting many models to show how this could work, but they  could not come to an agreement. So, in his late 40s,  Luchini walked away to launch Wolf Spirit Distillery,with the mission to live courageously with great  purpose.

Every entrepreneur faces challenges while setting up a business, and setting up a distillery is particularly challenging because beverage alcohol is so highly  regulated. Getting through the many steps, controls,safeguards, and approvals takes determination, patience and motivation. “It also requires the confidence to move forward without selling a bottle,” adds Luchini, “which is daunting. Money is going out, and no money is coming in during this time.”

Luchini wanted to create a delicious vodka people would love. “In 2017, I created the Blood x Sweat x Tears Vodka brand, and asked my master distiller, Ben Green, to create the vodka,” he  says. Getting “the juice” right took a year. Wolf Spirit started off  aiming to create a potato-based vodka: the distillery co-founder  Brian Kirschenmann is one of the biggest potato farmers in the  United States, which gave them access to very affordable  potatoes. However, the quality was not satisfactory; Luchini and  Green wanted to create a vodka with enough character to stand alone, either on the rocks or in a classic martini. So, they  switched to using wheat as the base ingredient. It took more  than 12 months and 3,000 liters of vodka literally down the  drain for Umberto, Ben, and their team to arrive at a vodka  they all loved.

Next up was the packaging, from the bottle to the boxes in which the vodka is delivered to stores. Wolf Spirit relied upon the team’s many decades of experience and deep  industry connections to access talented designers and  artists, all of whom loved and lived the company’s  mission: with their help, the packaging was designed  within six months. Similar access to manufacturing  partners sped up that process. Yet, the main challenge  remained: again as similar among start-ups, the  challenge was to afford the top ingredients, materials,  and talent despite limited funds. Personal connections  and the team’s will to be part of the entrepreneurial  journey were crucial.

The next major milestone was gaining federal approval  of the label, which was rejected twice. The first rejection  was due to the original label portraying an “anatomical”  heart; this was considered “deceiving” as it could have  led consumers to believe the vodka had health benefits.  The second rejection was because the back label  included the word “flavor”: at that time, federal law  defined vodka as “colorless, odorless, and flavorless,” so  the word flavor could not be included. However, overall,  Wolf Spirit was able to move forward with very few  changes to the original design.

The last start-up hurdle was to sell the vodka; Luchini  learned the hard way that that he was great at  marketing, but not so great at sales. This was solved by recruiting three top-notch salespersons: one focused on  distribution, one focused on stores, and one focused on  restaurants. This “dream team” was also given  ownership stakes in the company.

Since its launch, Wolf Spirit Distillery has been  recognized as one of the 50 Innovative Companies to  Watch. “I keep my focus on short and long-term goals for  the business, as well as short- and long-term goals for  myself,” said Luchini.“The short game for both is to  maintain focus, keep motivation strong, and of course  survive: as often said of entrepreneurial ventures, this is a  marathon, not a sprint.” For the business, the long-term  goal is to develop and grow a portfolio with brands that  are the envy of the industry. Luchini specifies: “Each of  our brands will be a craft in nature, national in  distribution, authentic in its story, profitable, and –  ultimately – alluring to investors.”

Blood x Sweat x Tears Vodka was created for misfits:  those pursuing their own dreams and own paths on their  own terms, made possible by the Wolf Spirit team of in  Luchini’s words “resilient team of crazy yet professional  misfits” who are inspired by what they are creating. The first imported product they added to their portfolio was Tom of Finland Organic Vodka, named for the artist who revolutionized the way the world perceives gay men:  rather than being seen as furtive and afraid, Tom portrayed his men as proud and loving. The next  product Wolf Spirit developed and launched, during  the pandemic, was Puncher’s Chance™ Kentucky  Straight Bourbon, which sold out after only six months.

Speaking of the pandemic, Wolf Spirit of course faced unprecedented uncertainty last year. COVID-19 forced Luchini and his team to become comfortable taking  business step-by-step and day-by-day, rather than  according to their customary 18-month planning  calendars. Yet, rather than feeling sorry for  themselves, they chose to help others: when they lost  almost all of their restaurant business overnight, they took advantage of the temporary drop in demand to  manufacture hand sanitizer, which they gave away  locally as well as to grocery workers in several states.

Charity is a way of life at Wolf Spirit: nearly since its inception Blood x Sweat x Tears Vodka has partnered with Best Friends Animal Society, a national animal  welfare organization working to save all homeless pets; they do this in honor of Green’s rescue pit bull, Mr.  Pickles, who can even be seen on the bottle. Tom of  Finland Organic Vodka donates a full 5% of sales back to Tom of Finland Foundation, an LA-based non-profit  which promotes and preserves the work of Tom of Finland, promoting tolerance for all.

Wolf Spirit Distillery’s mission to develop and launch craft lifestyle brands at a national level at an  affordable price is well underway. In closing,Luchini  says: “I hope you will continue to watch us! Our next  brand will be out by the summer.”

Revolutionizing the AI in Auto Industry

Data Intelligence in the Healthcare Industry

Want to Know What’s Going on in the World of Technology? Subscribe to the Best IoT Magazine for Latest Updates