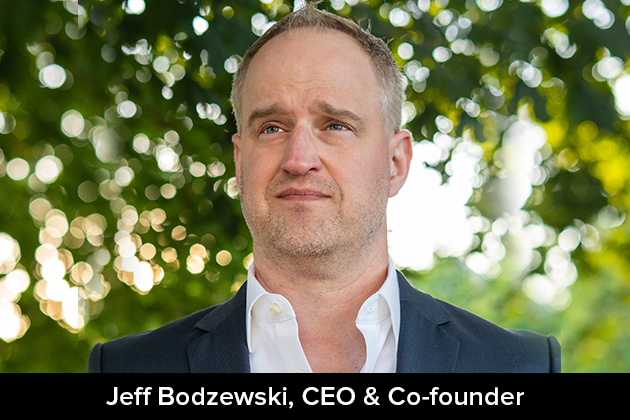 “No matter what path you choose, you have to be open to the world around you”. These words from Jeff Bodzewski, CEO & Co-founder at Wool and Water, couldn’t have come at a better time, when marketers around the globe are faced with a conundrum of how to increase customer participation and engage them digitally, amid the continually fluctuating pandemic.

Having delivered and led some of the most impactful and transformational mobile, social and Extended Reality (XR) experiences to the largest tech giants such as Google, AT&T, Microsoft, and Infiniti, Jeff has been a passionate individual of great relevance when it comes to brand building, executing digital marketing strategies, strategic planning and in helping organizations gain actual consumer insight.f

When asked about the inspiration behind naming the organization as Wool & Water, Jeff was exuberant to refer to one of the Chapters of “Alice Through the Looking Glass” – titled Wool & Water. What’s interesting to know is how deliberately pertinent Jeff and his Co-founder Justin McAneny were in picking this name. As Jeff narrates the story of the chapter, he refers to a situation in which the protagonist, Alice, starts complaining to the queen that she is unable to visualize the queen’s imaginary world. In response, the queen warmly tells Alice to close her eyes for she will be driven into an imaginary yet realistic place. The story behind Jeff and Justin’s Wool & Water is exactly the same – helping people visually experience the world they want to be in, right from the world they are actually in.

Shopper behavior is undergoing massive transformations over the recent past, and the pandemic has just added to the situation. There has been an evident surge in the number of people wanting to have virtual reality and augmented reality (AR and VR) experiences in most of their activities – be it purchasing, travel, gaming, etc.

During March and April, every search in Google regarding AR saw a 1000X increase from the previous year.

With the world going digitally deep and with technologies such as VR and AR at the very forefront of consumer preferences, Wool & Water has done the necessary homework as rightful adopters of AR and VR technologies. “What struck me was that there was no brand ready to take advantage of new technologies that many of the shoppers were using. We (at Wool & Water) took it in a different direction, looking at people’s increasing comfort levels with using Augmented Reality”, says Jeff.

That being said, retailers and marketers are left with no option but to change based on that evolving consumer behavior. Having made the shift towards AR and VR, they often resort to platform-based solutions and do not consider a holistic approach. This is exactly where Wool & Water draws the attention of retailers. “We realized that there was a tipping point around these extended technologies where there was a huge opportunity for retailers and brands to make money by driving sales, increasing loyalty, etc.”, Jeff points.

According to a study commissioned by the firm earlier this year, about 70% of average Americans had used AR or VR technology in the previous month, 25% used it for shopping in particular. A good number of them said that the reason for their purchase was the experience of AR as it helped them gain more confidence.

During March and April, every search in Google regarding AR saw a 1000X increase from the previous year. “Knowing that these technologies were specifically designed for taking people to another world, we began to look at a lot of consumer behavior data”, says Jeff. There is no doubt that Wool & Water team has done their research on AR and VR, which is built on rich experience in PR and advertising that Jeff carries with him.

There are fewer than 50 individuals who are capable of integrating extended technologies such as AR and VR in a retail environment, much less improve ROI and sales. Wool & Water is at the forefront of this effort.

Digital age has continually evolved and played an integral role in shifting consumer behavior. Brands and Marketers on the other hand are exhausting their full potential to embrace and adapt to the shift. The difference is that the shift occurring from brands is merely on a technological front or may involve leveraging standalone solutions and applications. This is the point where Extended Retail™, Wool & Water’s brainchild differentiates itself.

The firm’s Extended Retail™ offers a more holistic approach, one that involves some of the best practices and strategies for marketers to leverage against changing consumer behavior. It is a first-of its kind shoppable AR and VR experience that helps brands to not only improve their retail footprints but to also maximize the shift in consumer behavior by alleviating them of the dependency on single/standalone platforms or technologies.

“In the early 2000s, there used to be a standalone website agency or a mobile agency to help brands really take advantage of either an e-commerce website or a mobile app. In theory you have physical retail, and e-commerce presence. Extended Retail™ is really the bridge that unites these two together”, Jeff explains. The outcome of this integration means that brands will benefit from having their own new e-commerce digital channels, increase sales, and heightened customer brand loyalty.

Extended Retail™ combines the most innovative and advanced augmented technologies and provides customers with a feeling of being transported to a whole new world. The platform monitors and assesses each individual consumer, and generates concrete results that will appeal to that specific customer. This is followed by setting up one-touch digital shopping experiences for the customer, which is the integration of the brand’s physical and e-commerce experiences.

The firm has started to use digital signage and is incorporating AR and imagery, thus helping customers get access to their shopping tryouts instantly. According to Jeff, such technologies are gaining rapid interest among a number of people – especially those at retirement homes and at hospitals (for whom it is nearly impossible to visit a physical store). “They are really excited about this new boom, and we too are much passionate about bringing such a platform right at their doorstep where they can participate in a world that they would have never imagined”, said an excited Jeff.

For a firm such as Wool & Water, innovation is at the core of all their operations. The firm strongly believes that innovation for the sake of innovation will not do; rather it should be the right innovation that serves a specific purpose.

Citing an example, Jeff recalls an incident where there were certain firms who tried to leverage AR to build an experience for people in the automotive sector, which in the end ended up being nothing short of a glorified 3D gimmick. “Sometimes the biggest leaps forward may not seem as much because any number of organizations can build an AR app, but we are still the only ones to bring it to its natural next step at the click of a button”, Jeff claims.

The firm has been very pragmatic and passionate with regards to the emotions and interests of each consumer. For example, the firm had developed a solution for consumers to contact the car dealer immediately upon exploring the interiors and exteriors in a XR environment. From changing colors to getting a walkthrough and exploring its soul and substance – through the touch of a button in your phone.

Though a year old from its inception, the brains of the organization carry a commendable CV behind them. Jeff for example, has been working with brands to help them monetize technologies and experiences for decades. He has also been profiled by many prestigious media houses and publications for his passion and service towards implementing Extended Reality and similar innovative technologies.

Though carrying behind him a prolific background, Jeff still highlights the aspect of culture as the most important of them all. “For a startup like ours, culture is everything. We as an organization are united by a common goal, and we never aspire to be the next tech giant, but rather, we really make sure that our human elements are intact with the ability to freely communicate with each other that can translate into our clients’ business”, says Jeff.

The firm also ensures that amid the vigor of innovation, they are still grounded to ensure their strategies work. It’s a 50-50 balance, says Jeff. The firm’s strategic and pragmatic approach can be clearly seen in how they function with their clients. Based on their client’s goals and business position, Wool & Water recommends and executes at various levels. According to Jeff, its all about what you can do to steer someone towards a new brand, or a new flavor in quick time. It is strictly the AR play, says Jeff.

In the early 2000s, there used to be a standalone website agency or a mobile agency to help brands really take advantage of either an e-commerce website or a mobile app.

The firm is incredibly cognizant about following all of the technologically superior advancements and trends. Wool & Water’s keen interest on the latest advancements is to help their clientele plan their entire retail strategy and boost revenue. Initially focused on Automotive and Apparel, Wool & Water is seeing immediate opportunities in CPG, Food and Retail accessories, Sporting goods and according to them, these are the sectors that are up for further disruption.

Apart from these industries, the firm sees a great potential in the energy and the luxury space as well. “The energy industry is becoming a big focus for us. When we were working with an energy company, we realized that all those postcards and emails that energy companies were sending to their customers about energy savings were not read by most of them. What we proposed was to have a QR code or electronic communication based on image recognition and specific criteria, which can concretely point to what needs to be done to save energy”.

In the coming years, the firm is focused on futuristic technologies in the likes of holograms, and smart glass technology which can enable people to be transported to different worlds and environments at the touch of a button. “I sincerely hope that we are making the world a better place by increasing the number of access points where people of all genre, backgrounds can come, participate and gain something out of what we have created till now”, Jeff signs off.

The Top 10 IoT Trends That Will Rule Future