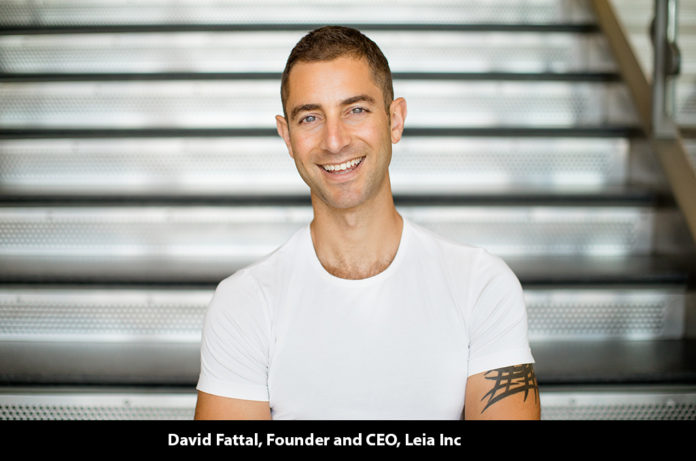 Lightfield imaging is a next generation medium producing unbelievably lifelike images viewable from many standpoints, with depth, look-around and rendering of complex light effects, textures and reflections. Early attempts of commercial lightfield displays were based on traditional optical solutions such as an array of lenses and demanded unacceptable compromises for the consumer in terms of 2D image quality / text readability and were hardly suitable for mobile. California headquartered Leia Inc. is taking a novel approach based on Nanotechnology and offering a lightfield display solution which is much more appealing to the mass market. David Fattal, founder and CEO, explains, “Traditionally there has been a huge discrepancy between what nanotechnology can do in the lab versus the real world. Proving a concept on an inch-sized piece of semiconductor wafer is one thing, but manufacturing for mass market at low cost, high yield and large quantities is an entirely different ordeal.” The secret? A new way to illuminate a regular LCD panel with a nano-imprinted layer called Diffractive Lightfield Backlight (DLB™) produced at large scale in Leia’s own facility.

David goes on to tell us that the thin DLB™ layer can be used to augment a regular LCD display of any shape or size, allowing seamless switching between the original full resolution 2D mode of the display and a “holographic” lightfield mode. A leading manufacturer of professional digital cinema cameras, RED, forged an alliance with Leia and leveraged the DLB™ solution to produce the much anticipated RED Hydrogen phone which is now distributed in the United States by AT&T and Verizon, in Latin America by TelCel, and soon to be launched in Europe and other worldwide locations. “We not only developed display modules for RED to build its product, but also provided the necessary software to support the content community at large, from movie studios wanting to convert their 3D assets to a lightfield format, to game developers, and regular smartphone users eager to snap lightfield pictures from their device and share with their friends,” reveals David.

The Medium is the Message

As a medium, Leia’s lightfield platform offers breathtaking opportunities for content creators and developers to engage their audience in fundamentally new and beautiful ways.

In 2016, Leia decided to invest in the creation and distribution of digital lightfield content and created a software branch named “LeiaLoft”. Initially tasked to create demos for potential partners, the LeiaLoft team grew significantly in the last two years. Today it supports a growing ecosystem of developers, photographers and other content creators to convert, create and distribute lightfield content via a suite of software tools, mobile APIs, developer portal and even a mobile app store.

The LeiaLoft team also boasts a world-class Computer Vision R&D team and authors original apps such as Holopix™, a growing social network to share lightfield pictures and Aura™, an AR Core based application that lets users draw in 3D space.

The Foundation of Leia and its Journey

The technical team behind Leia originated from HP Labs, specializing in late 2010 in the manipulation of light at the nanoscale and working on a project to route optical signals inside computer chips (so-called“optical interconnects”). On one of these bright California days the team was forced out of the cleanroom due to a fire drill and caught a glimpse of sunlight reflecting off one of their samples, creating a distinctively directional image. This is when it dawned on them that the same nanostructures they had been using in their interconnect research could be used to form holographic images from a very compact and power efficient device.

In 2011, the first prototype was successfully made utilising lasers on a lab bench, and by the end of 2012 “Project Leia” had become an official HP Labs project. In 2013 the technology was featured as the cover of Nature and gained much academic acclaim, as well as keen interest from industry players. Less than a year after this success, Leia was established as an independent company.

The Journey that Lies Ahead

After the launch of the first Leia-enabled consumer product, the team is now deploying its lightfield platform to a broad spectrum of industries ranging from consumer electronics (smartphone, smarthome, tablets and monitors), automotive, medical, retail with optimized image quality and interactive displays powered by Leia’s technology. David signs off on a positive note as he envisions the future of the company and how he and his expert team will continue to deliver value-added services, “They will become the standard of digital interactions. They will give a natural face to Artificial Intelligence and become a natural platform for entertainment, gaming and e-commerce. They will allow a better, more intuitive sense of tele-presence for conferencing, tele-surgery or remote exploration.”

Importance of Strong and Secure Passwords

5 Ways Proxies Can Revolutionise Your Business