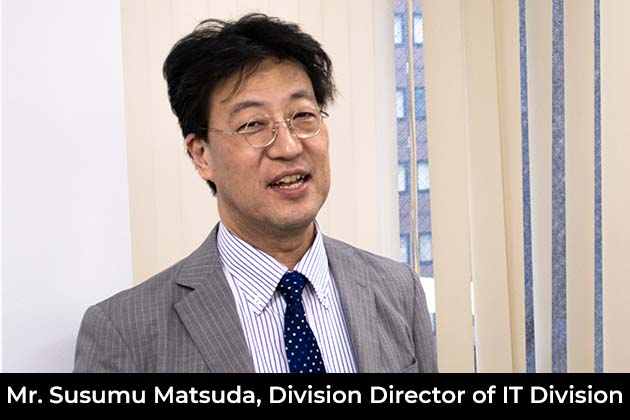 Santoku Corporation is a global company stimulating innovation in all the business processes, with a never-ending strong will for seeking the new frontier. The organization’s prime focus on universal safety has motivated it to expand its business globally. In 2008, the organization decided to build a team in Ho Chi Minh City, Vietnam to continuously develop virtual spaces and worked hard to build them. The fact that a small company was able to seek and utilize human resources overseas at an early stage is one of the factors that made it easier to push forward with globalization. Another reason for the company’s uniqueness is its ability to focus on all senses, reproduce them and develop ways to use them.

Santoku Corporation has been recognized as one of the 50 Innovative Companies of the Year 2021.The company developed this technology to meet the  needs of the market and to reproduce the every human sense that the market demanded, within the limits of what it could achieve using robot control technology. “To test the negative senses required by the market, we repeated field tests under the theme of  safety, and continued to brush up the system through trial and error and improvement operations for seven years, “said Mr. Susumu Matsuda, Division Director of Information and Technology Division, Santoku Corporation. The field tests focused on reproducing the more biological sensitivity of the human body. The result was the virtual generation of human biological sensitivity and the effective use of it.

The human sense of tactile pressure is relatively easy to achieve with the vibration control technology developed in collaboration with research institutes. However, the reproduction of pain sensation, a typical negative sensation demanded by the market, required a change in thinking. This was a great opportunity for the company, which had been developing products focusing on visual reproduction, to take on a new challenge. There are a great variety of senses that make people feel the danger in their work.  Reproduction of these various senses is also very meaningful as a theme, and it was an important deciding factor in its decision to continue development. The organization’s specialization in reproduction and usage of negative sensations has played a major role in the growth of the company.  The advancement in this industry in terms of technology is because the use of VR started with the reproduction of vision and hearing, and it’s a necessity to use it together with the reproduction of the other five senses. This opened the way for VR to be used as a technology to reproduce humanoids. The Cyclone Philosophy that Santoku Corporation has adopted in its development is a method of continuously repeating the cycle of field testing and improvement to enhance functionality.

Santoku Corporation is in the process of developing products that focus on enhancing human safety by using VR technology as a base. The company does not  develop VR technology itself but rather views it as a means of reproducing the senses. They are not limited to the basic functions of VR, but on achieving its goals by integrating other technologies with free ideas whereas other companies focus on VR technology itself or on recreating things based on the laws of nature, and are unable to match the intuitive images of people with the  re-creations. There is a big difference in being able to focus on creating images that people can perceive for a specific purpose, hence the big difference between other companies and Santoku Corporation’s product.

Santoku Corporation has worked with several industries of different sizes and has overcome various clients’ challenges and has developed solutions to overcome those challenges. The problem of occupational accidents in the manufacturing industry requires continuous improvement, as it can harm the people who work in the company, reduce productivity, and damage the company’s image. In 2014, the company met with a group of instructors who provide safety education on occupational accidents. For students to understand the importance of human life, the team wanted them to experience a disaster and become more safety conscious, which is dangerous. This is when the challenge of recreating dangerous disasters has begun.  The team solved the problems step by step through real experience experiments. Therefore, they incorporated auditory sensation, reproduced the sense of equilibrium by reproducing gravity, added skin sensation by wind pressure, and added the reproduction of force, etc.

In this age of overflowing goods and intensifying cost competition, the creation of ideas and thoughts is attracting attention. The most valuable thing that does not exist in the world is a means of communication that directly touches people’s hearts. The realization of a means of communication that directly makes people feel joy, anger, sorrow and pleasure is valuable. Mr. Susumu Matsuda, Division Director of Information and  Technology Division, Santoku Corporation feels that it is necessary to establish a means of communication that focuses on influencing people’s emotions and encouraging them to make decisions, such as “directly feeling what is presented, “feeling happy,” “changing feelings,” “wanting to do something” and “wanting to avoid something”.

Santoku Corporation believes that people around the world, regardless of cultural differences or countries, will understand its philosophy and agree with its safety ideas. The company’s means of communication is a method that directly appeals to the sensory organs, transcending language barriers and allowing it to communicate more intuitively, which can directly appeal to the mind. It will  take some time for everyone to recognize the effect of  this method, but once people experience it and confirm the effect, The Company believes that this method will permeate society as a common means of communication for all mankind though it will take time for people to recognize the effect of this method. With the rapid spread of Internet based communication and globalization, society has been changing rapidly. Besides, the global environment is rapidly changing along with industrial changes and the environment surrounding people is also changing drastically. To live safely in this environment, people need to be able to respond appropriately to the obstacles that arise from these changes. People are accordingly faced with the need to create new methods to maintain safety.

Santoku Corporation has plans to create a database of disasters that humans have already experienced, and share this information with the people living on the Earth through RiMM Also, the organization is determined to create an environment where people with a high level of safety awareness can gather and use this knowledge to create a system that enhances safety. Their mission to urgently build a system that will enable people to cope with unexpected disasters that will occur in the future due to rapid global changes.

Hortonworks: Security, Through the Lense of Data Science